Inside the Insiders is a series of interviews with some of the most recognized and outspoken Microsoft influentials, journalists and enthusiasts I know. I plan to go around interviewing as many of these peers as possible to find out more about their background, life outside of Microsoft and their darkest Unix fetishes. At least that’s what I tell them. Little did they know their answers will help me annihilate them and my other competitors. Everyone’s still falling for it, even when I tell them outright. 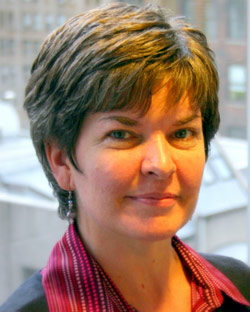 She’s so full of karma, she glows of a warm shade of gold.

In an era of journalist-wannabes, there are only a few who can claim they actually studied journalism or worked as a professional journalist for much of their lives. Mary Jo Foley, or otherwise accurately nicknamed the “Microsoft Watcher” has done both. She’s been in the business right from the beginning when Steve Jobs was just a guy with the turtleneck. She probably knows more code-names than exists. And she’s broken several quite infamous Microsoft stories over the years, most negative – but that’s what people want to hear. I also had the pleasure of meeting Mary Jo at CES this year and so did Maryam Scoble who did an excellent video interview. Here’s my not-as-good-as-Maryam’s interview.

Hello Mary Jo. If you were a car, which one would you be?

Without a doubt, a chauffeur-driven limo. I hate to drive and am not a good driver. (Hey, at least I know and admit this. Why do you think I moved to NYC?) I don’t have a car, don’t want one, and don’t care if I never drive again. If I can’t be a limo, I’d settle for being a Microsoft Corporate Shuttle (with a driver, of course).

Long: Hey Microsoft, if you want to hide secrets from MJ, hold meetings in a car park!

So you are the official Microsoft Watcher. How did that title come about? Or do you have a really big telescope pointed at Redmond?

There are many Microsoft watchers. I am just one of a flock. I got the Microsoft Watcher™ title (if I have it) by launching the Microsoft-Watch blog a few years back when I worked for Ziff Davis. That blog is now run by former Microsoft analyst Joe Wilcox and I have no affiliations with it. Now I am the “unblinking eye on Microsoft” over at ZDNet blogs. My new blog is “All About Microsoft“.

And as for a telescope, who needs one? There are so many Softies, former Softies, Softie customers, Softie partners and Softie competitors all over the globe that you can watch Microsoft from anywhere these days.

What type of Microsoft products or services do you have on your radar screen this year?

Last year, it was all about Vista. This year, I’m paying close attention to Windows Server 2008, the various Microsoft services (sometimes known as Live, sometimes known as MSN), and anything with a codename that I can scare up. Speaking of codenames, I am thinking about printing up a set of business cards with “Codename Queen” as the title. What do you think?

Long: You’ll have to print another set for Steve Sinofsky, he won’t be able to understand it.

How did you start covering Microsoft?

Ah, that’s a long and sordid tale. The short version: I used to be a Unix reporter (Unix-watch.com, anyone?) in the late 1980s.. That was when I worked for PCWeek (now eWeek). When the Microsoft reporter there quit, they asked me to take the job. Hey — Unix, NT — it’s all the same, right? I foolishly agreed and moved to Seattle in one fell swoop. Here I am, nearly 15 years later, still watching Microsoft.

Long: Hey if you can’t beat them, join them right?

Didn’t you cover Microsoft way back when, like before Windows 95?

You did your homework, Long. Yep, I actually wrote about Microsoft for the very first time in 1984. (Yes, I was a child prodigy, for those trying to do the math.) I interviewed Bill Gates in 1984 for a cover story for a publication called Electronic Business. I did occasional Microsoft stories for the next several years, but didn’t become a full time Microsoft watcher until the early 1990s.

How has Microsoft treated you over the years? You’ve broke some groundbreaking stories.

Urban legends are a wonderful thing. I never flipped a burger in any Microsoft cafeteria — girl scout’s honor! I did ride the corporate shuttle (but not all day long). But the reason I rode the shuttle was because of my driving ineptitude more than for its tip-gathering potential.

Did you study journalism in college or university? If so, why did you choose journalism? If not, how did you get into journalism?

Wow. You’re really going back. Yes, I was a journalism major in college. I had absolutely no idea what I wanted to write about when I graduated. Luckily, for me at the time, tech was starting to boom in my home state of Massachusetts. So that’s how I ended up a tech reporter. I had never used a PC when I started out. But as soon as the first IBM PCs came out, I rushed out and bought one so I could check it out. I think if I were starting out as a budding journalist these days, I would have double-majored in journalism and some kind of tech field so that I wouldn’t have to start from zero in figuring all this geeky stuff out.

You’re a freelance writer, what do you do every day? How do you organize a day when you can ‘do anything’?

I start my day by checking my RSS feeds and surfing the Web to see what’s going on. I usually do a couple posts and other freelance assignment work and then make breakfast or lunch (depending on how fast I am). I have worked at home for a lot of my career, so I am pretty disciplined about getting things done. And I don’t have a TV, so that helps lessen a few possible distractions….

It’s not a moralistic thing, as some assume. TV is bad; I am good. Nah — I just decided when I moved to NYC in 1999 that I wanted to force myself to get out and enjoy all the cool things this city offers. If you don’t have a TV, you tend to get up and out of the apartment more, I’ve found. And with the Web, it’s pretty easy to keep up with the news, etc.

What was the best moment during your time writing about Microsoft? Worst?

Believe it or not, after all these years, I still love breaking a story. I love the chase and the fun of getting a new piece of info first. So for me, the best moments have involved getting new/cool/interesting info and being able to turn it into a scoop. Worst moment? Being WRONG! Everyone is sometimes. You just hope the times you hit outpace the times you miss, in this business.

Long: When I’m wrong, I hide myself under my bed holding my teddy bear.

Are there any especially memorable interviews? Any interviews gone horribly wrong? For example, interviewee didn’t have a clue what he or she was talking about?

OK. You are putting me on the spot here. Glad I am usually the one asking and not answering the questions.

My favorite and most memorable interviews have been when I really clicked with the person I was interviewing. The worst have been when the person was warned about me and came into the interview defensively, ready for war. I’d rather not name names, in either example, because old Softies never go away — they just come back in new (and usually higher-level) jobs.

One of my funniest interview moments happened during the very first time I interviewed Bill Gates. I was brand new to covering technology. I was interviewing Gates on the show floor at Comdex in Las Vegas. We were out in the open in the Microsoft booth. Up came Steve Jobs while I was interviewing Gates. Gates and Jobs started chatting. I waited and waited. Finally I said to Jobs: “Do you think you could come back another time? I’m trying to do an interview here.” Gates said to me after Jobs walked off, “Do you know who that was?” I didn’t. Gates said: “He’s the head of Apple.” Yeah, not an auspicious beginning…but my very first story on Microsoft came out really well in spite of it all.

Long: You broke the universe! Gates was probably trying to talk him out of the computer industry. Now look what you’ve done.

Are there any plans to retire? It sounds like a really fun job, but keeping an unblinking eye must have its fair share of pains. Do you feel like just putting that all aside someday?

Wow. Am I that old that you are asking me about retirement? I feel like blogging has given me a whole new lease on my career. And getting to meet bloggers like you and the folks in the Microsoft Featured Communities has been really rewarding. You guys are my inspiration, seriously. You keep journalists honest and remind us of why tech news is a great place to be.

So far, I haven’t really glommed onto videoblogging or podcasting, but plain-old blogging is a blast. I love my job. I love learning new things every single day. It’s humbling and exciting. So no thoughts of retirement yet. I want to keep doing this for as long as I’m able.

If and when I do leave the field, maybe I’ll start baking vegan cupcakes or something and sell them on the subway….as you can see, I haven’t given “what’s next” a whole lot of serious thought.

Thanks MJ. You have been assimilated. I mean, look forward to seeing you again soon.

Thanks Long! Looking forward to it!