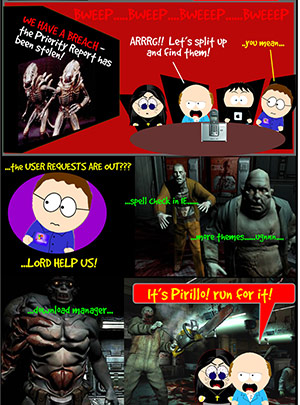 What better way to make fun of the silliness that was a list of Utopian user-generated suggestions for future versions of Windows somehow evolved into Microsoft’s secret recipe for success, or at least protected as such, than a parodic comic-strip from the infamous Microsoft comic-stripper Jamie. If the name rings a bell, that’s because he fueled the fire over on Channel9. Ironically amusing.

If you’ve been living under a rock, then don’t tell me I didn’t warn you. There are more news references in these witty dialogs than there are in an episode of Family Guy. There’s also a bunch of permanent cast members you should probably familiarize yourself with. Nevertheless, even if you don’t know who’s who, still worth checking out. Click here for a full list of references used in this strip.

In this latest masterpiece, Mini-Microsoft, Fake Steve Ballmer and Fake Steve Jobs sets out to find the “Priority Report” generated by the Precons(umers). They succeed and in doing so, opens a portal setting the ideas free where they are subsequently leaked. After being chased by Microsoft, they escape just barely. Just as Microsoft prepares to fire a laser upon them, three bloggers (myself included) come to their rescue.