Ah, product feedback surveys, what will we ever do without you? You share your most intimate secrets and future product ideas with complete strangers all in the name of marketing research. Thankfully Microsoft surveys are no exception. 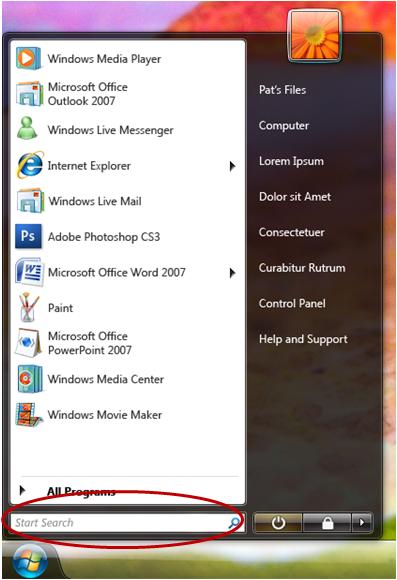 An anonymous tipster pointed out to me in a recent (private) Windows feedback survey sent out by Microsoft, asked how often users use the Start menu search functionality, was a screenshot highlighting the aforementioned feature but not of Windows Vista and certainly not anything we’ve ever seen before.

The most logical explanation would be of course, this is a mockup of Windows 7.

If that is indeed the case, which is impossible to prove I might add, then we’re witnessing a number of changes from the Start menu in Vista today and even the Start menu from the leaked build of Windows 7 Milestone 1.

Notably the Start pearl/button/orb rests in a curved corner that is darker to the rest of the taskbar which is now considerably more transparent and white. And quite possibly the taskbar is “double height” by default. Some applications in the start menu also have a cascade button on its right, leading me to believe its some sort of extended menu, for what purpose I don’t know.

There are also a few things in this screenshot which stand for the wrong reasons. Some of the applications have icons which doesn’t match. For example, Outlook has the Windows Mail icon and PowerPoint has a XAML file icon. Then on the right side, the link buttons which are expected to be “Pictures, Music, Games etc” have been replaced by Lorem Ipsum filler text.

In case you were wondering, the screenshot has since been removed from the web server where the survey was hosted. It has been replaced with a more familiar screenshot from Windows Vista. Obviously, too late.