Some of you with a sharp eye might have noticed something very interesting on-screen during the Windows 7 multi-touch demonstration at the D6 conference yesterday. If you did, you might be curious to understand what you saw. If you didn’t, read on anyway. Update: The new taskbar is superficially called the “Superbar”. 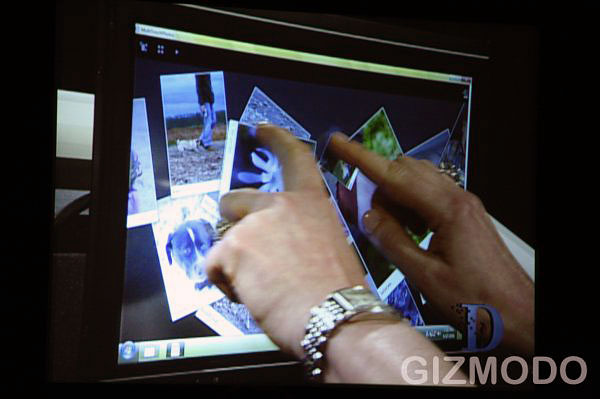 The picture above comes from the video feed of Julie Larson Green‘s (Vice President of Windows Experience Program Management) demo of the multi-touch picture browser demo app. The quality is a little rough, but you can easily notice a few things that are different.

The first being the taskbar is higher than usual, but not as big as double-height. If I were to guess, I’d say its somewhere around 1.75x-high. In the left corner, the Windows orb remains wedged “on top” of the taskbar – sticking its head out a little – instead of in the center like it is today in Vista.

The taskbar also appears ‘divided’ into sections by variations in the color (dark, gray, lighter) to indicate the different areas. Speaking of which, if you look at the far right corner, you’d notice that the tray (icons & clock) is not touching the edge of the screen, and there’s a small lighter gap. I have no explanation for this, but is well worth keeping an eye on.

A double-height taskbar in Windows Vista

Keeping the focus on the right, the tray is also different. The icons sit in the middle of the taskbar, instead of wrapping in two-lines like it does today, whilst the date now wraps on two lines instead of three. This clearly indicates this taskbar cannot accommodate three lines of text.

Most obviously the quick launch icons are now larger in size, but the icon besides it is not a quick launch icon instead an application. I’ve been told this particular Windows 7 build has rendering issues which is why there’s no label or text next to the icon, but there should have been. At the same time, the icon also should have been a smaller version of the “Live Preview” thumbnails you see when you hover over applications in the taskbar today. That would have been pretty sweet. Apparently that feature has been canned .

Now you would probably be wondering why I just spent so much effort writing about a taskbar, and the answer is because this is what Windows 7 is about. They’re going to take existing interface elements like the taskbar and give them a new coat of paint with some sparkles. Different enough so you notice them, like Walt Mossberg did.

During the demonstration (5:25) Walt asks “I can’t help noticing that the taskbar doesn’t look like the taskbar?” Julie responds with, “It’s something we’re working on Windows 7 and I’m not suppose to talk about it now today.” Shutdown.

Update: Guess those Windows “Start Menu” surveys weren’t all flash and no substance.