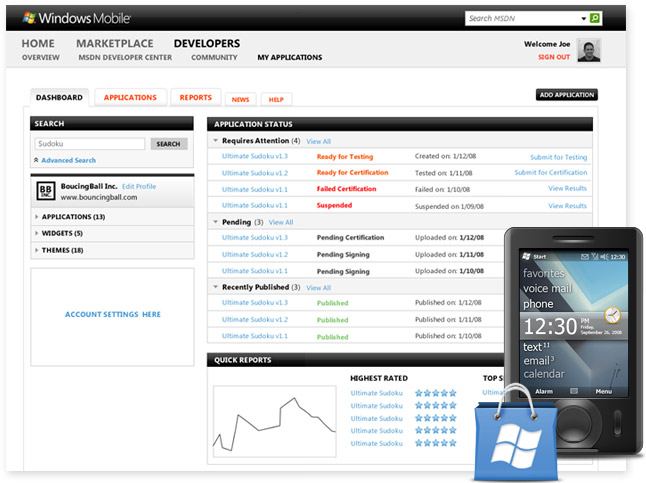 I’m beginning to question if Microsoft’s motivation to open a centralized app store for Windows Mobile is more so for profit rather than the growth of its application platform. What I expected was a distribution platform that welcomes developers with open doors, warm cookies and fresh milk, not an exclusive downtown club with former boxers for bouncers and overcharges for food and beverages.

I understand that in the perspective of a reviewer who has to qualify these applications, every new binary could be an entire rewrite of the application, but then on the other hand it could just be a simple typo correction. An expensive typo at that.

What this means to developers is that if they submit one application to the marketplace, they have only 4 opportunities to update that application a year. Whilst most commercial applications do not update as frequently as 4 times per year, much of the gem that’s in the iPhone App Store and on hobbyist WM development sites like XDA-developers are casual projects and receive a flood of updates during its early days as bugs are squashed and polish added.

On a lighter note, imagine if the tables were flipped, instead, Microsoft paid developers to improve their applications. Wouldn’t that be nice.

Update: I’ve also learnt that Microsoft will charge developers for resubmitting applications if their prior submissions were rejected.

Update 2: Microsoft has told CNET.com that application updates within 7-days of last certification are considered free. Weird they would leave that detail out when they were answering my question, but this is a better model which allows for some room for errors.

Update 3: Microsoft has since changed the Marketplace pricing structure and application updates are now free. Yay.