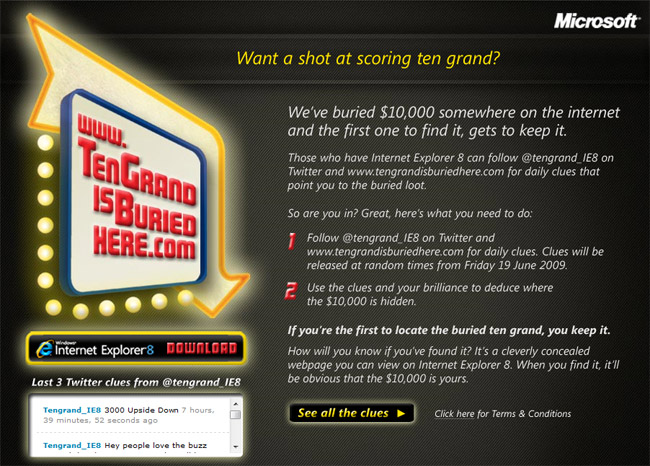 A strong marketing effort behind Internet Explorer 8 right now seems to be hitting all the controversial buttons. First came “Browse for the better“, a US food donation program supported by IE8 downloads. Followed by Microsoft Australia’s “Ten Grand is Buried Here“, an online treasure hunting game exclusively for IE8 users. And most recently “Get the facts“, a feature comparison chart comparing IE8 to other browsers. If you agree with “no publicity is bad publicity”, then they sure got their money’s worth.

The Australian “Ten Grand is Buried Here” competition in particular drew a lot of criticism around its messaging towards users of browsers other than Internet Explorer 8 – telling the users to “get rid of it or get lost”. I agree with the view that the words used are very strong, but as a devoted Firefox user, I took no offense by it. But by judging from wild reactions, a lot of people were. Microsoft has since responded.

Earlier today, the messaging was briefly changed to “get lost in the hunt” which I’ve been told is the originally context of the message, but another inspection of the site tonight seems to indicate the message no longer targets different browsers. Instead, users of all browsers are encouraged to participate equally, whilst still encouraging the use of Internet Explorer 8.

Furthermore, the underlying concept of the competition appears to have also changed as it no longer states “a cleverly concealed webpage that only Internet Explorer 8 can view”, but now “a webpage you can view in Internet Explorer 8″. The wording appears to have been changed deliberately which would indicate that the hidden treasure will be viewable on all browsers. This has been confirmed.

If this is true, then it could be quite the turning point for the competition. No longer could it be viewed as a marketing ploy to coerce people into using Internet Explorer 8, instead, a fun and and potentially extremely rewarding online puzzle game that encourages people to explore the web, sponsored by Internet Explorer 8. Something that users of any browser should be able to get behind.

Finally, if you’re keen on playing along then keep an eye out on forums threads like the one on Whirlpool who were quick to solve today’s first clue. The clue “3000 upside down” was solved as the URL prefix “www” as the number 3000 in roman numerals are notated by “MMM” which flipped became w’s.

P.S. The “it’s not as stupid as it sounds” text in the footer was always in context of the “tell a friend” messaging. It implies that telling your friends about this competition is not a bad idea since you might not have the chance to follow or solve all the clues yourself. Some people obviously misinterpreted that.

Update: Microsoft Australia’s Gianpaolo Carraro, the man behind this competition, blogs his thoughts and experiences over the reactions to this competition from around the internet.