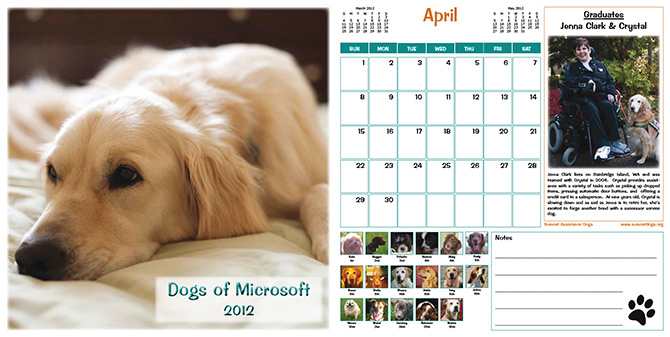 Where there’s cats, there’s also dogs. Having wrote about the Cats of Microsoft Calendar, I feel morally obligated to give equal representation to canine friends and their Dogs of Microsoft calendar. Unlike your typical cat versus dog scenario however, both win for very noble causes.

The idea for a Microsoft dog calendar started in 2007 when employee Janna Harala was inspired to fundraise for a friend’s wife who was in need of a service dog. In the same year, she also broke the Guinness Book of World Records for the “largest Dog Biscuit in the World” with the help of Microsoft who owned the “largest oven in Washington”.

Since then, a volunteer team of Microsoft Finance Analysts, Program Managers, Portfolio Managers, Advisors and People Managers has taken on the role for dog-related funding events at Microsoft after the original employees left the company. Through various activities including but not limited to the dog calendar, they raise funds for Summit Assistance Dogs, an animal non-profit who train service dogs for people with disabilities.

In addition, some Microsoft employees also volunteer their time to raise and train service dogs themselves, including obedience training on the Microsoft Redmond campus. “One occasionally sees the green-vested dogs accompanying their foster parents as they go about their daily jobs on campus.”

Having written about just a few of the fun employee-driven fundraising activities Microsoftees undertake, it comes as no surprise Microsoft recently announced they broke the record raising over $100 million of donations for nonprofits in 2011 with the company’s generous donation-matching policy. 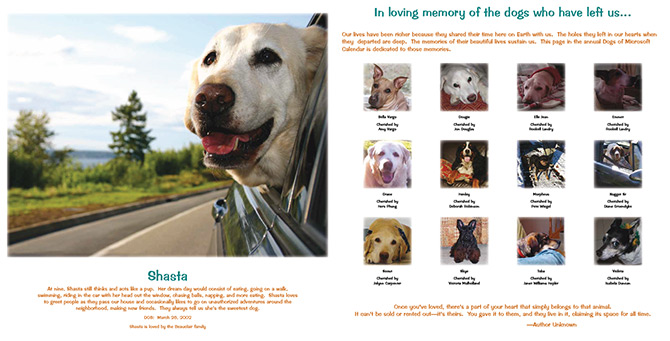