Windows SideShow is one of those features that has been implemented in Windows Vista since day one, but no one ever finds interesting or talks about. I’m speculating the cause of that is the lack of SideShow-compatible devices on the market. Although I’m sure thats a tiny problem, right? No loving review samples to go around. 🙁

Everyone’s impression of Windows SideShow is most likely a reminiscence of the Channel9 video which featured a demo on the faux-standard SideShow demo device, the ASUS W5Fe prototype. Or perhaps the glassy digital picture frame. Ever since, everyone’s imagination has probably been confined only to a bulky looking PDA glued to the back of a laptop or executive-priced picture frames. But that’s where you’re wrong.

Here is an illustration I found in the MSDN Library which shows off very well, the potential of SideShow.

And there’s also an example of the expected interface on SideShow devices. Of course, in the hands of OEMs, that’ll get turned into a mash-up of bevels and drop shadows like Intel knows best.

But the most interesting out of all this is not what you can see, but who’s behind all this. The primary manufacturer behind the hardware technology is PortalPlayer, recently acquired by NVIDIA. You might remember PortalPlayer as the sole provider of the system-on-chip solution for all iPods until 2006 when Apple switched manufacturers. Oh the irony. But what could this mean for SideShow and Microsoft?

Could you imagine, a device that can be attached to a laptop and serve as a mini-PDA for when situations when your laptop is inappropriate, and when detached, lives a double life as a phone, PDA, media player and remote control? I know I can. 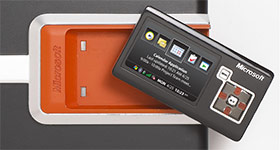