Since I can’t juice any information out of the Microsoft lemon about the progress of Vista’s first service pack, I thought I might flip the equation and find out about the user’s expectations. For those of you too lazy to scroll down to see my post from yesterday, I conducted a poll asking what the readers of this blog – the people who sit at their computers on a weekend like myself, think they will get out of service pack one. The results are not surprising, but confirms my fear that Steve Sinofsky has big shoes to fill. 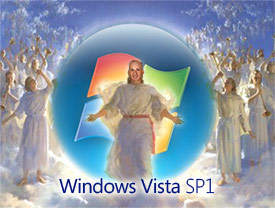 You see, not only does 30% (128 responses out of 423) of the people think Sinofsky is going to be responsible for fixing all their Windows Vista problems, and only God knows how the users will revolt if he doesn’t, but 22% (92) of others have reasons to believe Steve is actually Jesus resurrected. An outrageous claim you say? Not if you join the dots as I did.

If Steve was Jesus, then his father would be God. And since God knows all, including how people will feel about SP1, that knowledge would be extremely useful to Steve. He’ll know about all the ways to please the users putting in the least effort, like what bugs to fix and what features to add. But it won’t be the first time he’s abused such family relationships. The overwhelming success of Office 2007‘s user interface? God helped him. There’s no argument, it’s the only explanation – Office is suppose to be boring.

But that’s not all what religion can explain about Microsoft’s recent behaviors. Some of you might recall the shortest-ever press release Microsoft published a few months ago, telling pundits to shut up about Windows 7. Many people including myself thought this was just a reaction to control all the wild rumors spreading about, but that wasn’t the reason. I’ve now realized, Kevin Kutz is actually Moses. And the press release was actually the first commandment – “Thou shall not speak about Windows 7”. It all makes sense.

Getting back to the topic of SP1, if there’s anything you’d like to be fixed or added to Windows Vista, just pray. God will hear you, and he’ll pass it on to Steve. Talk about a state-of-the-art bug reporting system.

P.S. I will be having my mid-semester exams all of next week. Since blogging does not yet contribute to my academic progress, I have little choice but to study instead. However afterwards, I’ll have some coverage of Microsoft’s ReMIX in Melbourne as well as some priceless gifts to give away. 😉

P.P.S. Whilst I’m away, please read I CAN HAS CHEEZBURGER? for all the latest Microsoft news and affairs. Many people don’t know, but some of the best Microsoft information comes from the LOLCATS sub-text.