Frank Arrigo formally kicked off Microsoft TechEd Australia today with an early morning keynote at the Gold Coast Convention Center. He was joined by a bunch of actors dressed as tourists pretending to be discovering TechEd, as a holiday destination. Weird, but I can live with it. Here was the introduction appetizer video teaser. 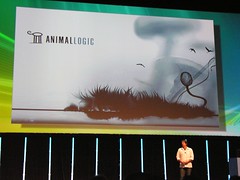 The featured speaker was Michael Twigg, production resource manager at Animal Logic. If you think you haven’t heard of Animal Logic before, then you’re not alone. Whilst most people have probably come across their work at least once, they don’t receive nearly as much credit as they deserve. I would even rank them alongside Industrial Light and Magic (Star Wars) as the leaders in the digital visual effects industry. Some of their fine work include The Matrix (Original and Reloaded), House of Flying Daggers, Lord of the Ring: The Fellowship of the Ring, 300, and their recent feature baby, Happy Feet.

From what I have heard, some attendees weren’t too impressed with the keynote (speaker). I’m guessing their reasoning is that it has no direct relevance to Microsoft or anything that benefits their professional career, which is what they paid thousands of dollars for. Reasonable. However since I’m here not here to ‘learn’ anything, and being a movie junkie, I was very impressed.

Some other highlights with photo from the keynote:

I weren’t kidding about the tourists. They were taking pictures and everything.

Some of Frank‘s LOLCat slides.

Making of “Matrix Reloaded”. Includes concept and research to come up with the Twins’ “smoke” effect.

Side note: Sorry for my out-of-order TechEd coverage, but I had to wait a few hours for the high-definition video captures from the keynote by the official recorders. Worth the wait over my 640×480 30-second clips from my camera. Speaking of which, special thanks to Howorth PR and video editors for delivering this high-quality video feed in a very timely manner.